Crusher obstruction incidents always present a serious safety issue for any mine due to the tremendous amount of stored kinetic energy in the trapped object. American researchers at the National Institute for Occupational Safety and Health found that incidents involving crushers are the second most common cause of fatalities caused by stationary machinery at mines in the United States. Obstructions occur when an object that is too hard to crush enters the machine. Although many objects can obstruct a crusher, shovel and loader teeth are some of the most common. Obstructions caused by missing teeth are extremely costly, with the average incident resulting in 12 – 24 hours of crusher downtime. For the two Chilean copper producers in this article, the best way to keep mine personnel safe while mitigating production loss is with a missing tooth detection solution from Motion Metrics.

“Having worked as an Engineering Manager at a Canadian mine in the past, I can tell you that the best way to manage the risk of an obstructed crusher is to avoid the situation entirely,” says Derek Cooper, VP of Sales and Operations at Motion Metrics. “Failing that, mines should aim to mitigate problems as early in the process as possible. Motion Metrics offers missing tooth detection solutions for shovels and loaders to quickly alert equipment operators to broken or missing teeth.” These solutions, ShovelMetrics and LoaderMetrics, have been trusted by the world’s largest mining companies since 2004 and have been installed at more than 60 mine sites across six continents. Using artificial intelligence and either visible range or thermal imaging, ShovelMetrics and LoaderMetrics work 24 hours a day to keep mine personnel safe and minimize crusher downtime.

Chilean state-owned copper mining company Codelco uses ShovelMetrics at its Gabriela Mistral division to detect missing shovel teeth. “The system takes successive pictures and compares them to one another. Through this process, the system determines whether there is a missing tooth or if any teeth have worn out and need to be changed; using colour codes like a traffic light, the system alerts mine personnel so that they can act before the missing tooth enters the crushing circuit,” explains the Mine Manager at Gabriela Mistral, Gustavo Córdova, in an English paraphrasing of a Spanish article published by Codelco. For Córdova, ShovelMetrics is an essential safety and productivity tool. “Faced with a crusher obstruction, an operator must enter the crusher to solve the problem – at great risk to himself,” says Córdova. “Therefore, we now solve two issues because we remove our people from the line of fire and maintain operational continuity.” 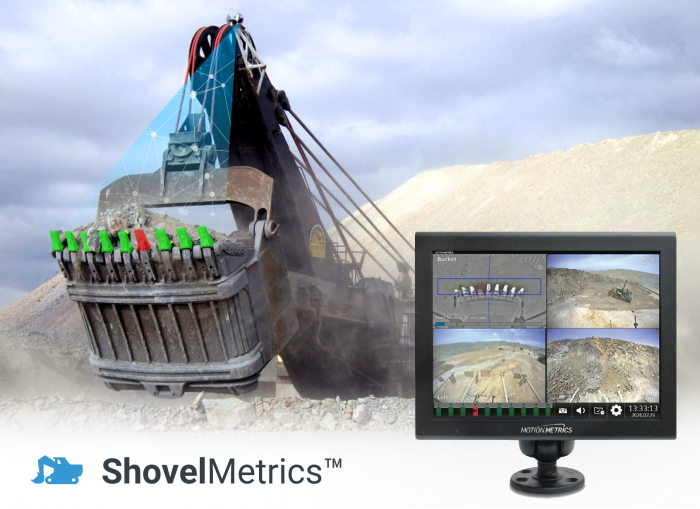 More than 60 mines worldwide use ShovelMetrics to quickly alert shovel operators to missing teeth. Codelco’s Gabriela Mistral division is among the many mines who count on ShovelMetrics to keep mine personnel safe.

At another mine in the nearby Coquimbo region of Chile, LoaderMetrics has helped to prevent an estimated $1.5 million production loss. Like many hard rock mines, this Chilean copper producer experiences significant production loss from tooth breakage each year. Between 2012 and 2015, the mine attributed 153 hours of crusher downtime to obstructions – an average of 51 hours per year. To mitigate the impact from missing loader teeth, the site installed LoaderMetrics on two loaders. Since installation, the mine has experienced zero crusher downtime due to missing loader teeth.

The mine’s crushers process an average of 5000 tons per hour. If there is additional stockpiled material to provide ongoing operational support, an obstructed crusher may not immediately impact operational continuity. But if plant operations must be halted, the cost to the mine is approximately USD $25K per hour. Thus, the roughly 50 hours of yearly lost production due to a preventable crusher obstruction could cost the mine $1.25 million in lost production. Over the course of a year, the system detected 12 missing loader teeth and experienced zero crusher downtime – preventing the $1.25 million annual production loss that the mine would have experienced prior to installing a missing tooth detection system.